From the original 4-track demo tape... Courtesy of Rick Giampietro... 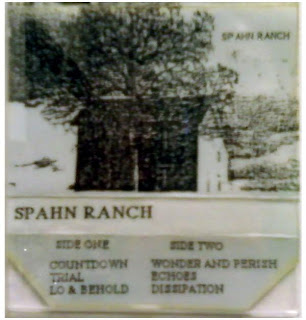 Love those jungle drums. Irresistible, primal, they got you.

Best Non-Gimmicky Use
Radiohead, There There

The Fall: Tempo House from Perverted by Language

Visiting family back in Detroit, and staying with dear friend Bobji*. We spent the night trading music... I hooked him up with Sufjan Stevens, My Bloody Valentine, Ry Cooder, Fujiya & Miyagi, etc. He hooked me up with Spiritualized, LCD Soundsystem, old Tones on Tail, etc. So much fun.

As the hours got wee, we discovered this gem recently added to YouTube. The Fall's Perverted by Language album is in my all-time top 10. I have numerous live / bootleg versions of most of the songs on the disc. What is so cool about this video is that it is the very performance recorded on PbL. I didn't even know a video for this existed. I've listened to the audio so many times, every squeak and squawk, click and clack is burned in my brain. Watching Mark E. Smith and gang actually perform it... so cool!

I've been having a great trip home, including time today at the newly opened Detroit Institute of Arts. Awesome, more later on that I hope...

*Bobji was the singer for Spahn Ranch (I was the guitar player, Odell was the drummer and Hobey the bass player.) We were the Detroit based Spahn Ranch, not the industrial band of the same name (that had much wider acclaim and is what turns up if you use a search engine.) Anyway, someone on the net recently digitized our first (and only) album. Here's a few songs from it: countdown & echos of the day. And here's the cover!

They also made a MySpace page for us.

Krista's sister works on web stuff for KCRW in Santa Monica. Or "the home of the homeless" as Harry Shearer says at the close of Le Show. 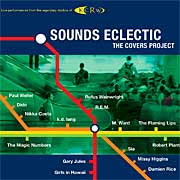 She gave Krista the "Sounds Eclectic: Covers Project" CD... I'm loving it. I love covers in general, and for me highlights include two Neil Young soungs (Out on the Weekend and Harvest), James Taylor's Fire and Rain covered by Dido, but most remarkably an acoustic rendering of Beyonce's Crazy in Love that blew my mind. (You gotta love the line, "Got me hopin' you'll page me right now!")

Cool!
There is a treasure trove of goodness at KCRW's Morning Becomes Eclectic site...
at May 22, 2007
Labels: music

He married Isis on the fifth day of may...

I am turning into a bad traveller.

I cannot seem to sleep in strange beds. In NYC right now. Woke up at about 3:30am EST (which is 1:30am PST, still my biological time.)

But tonight I am happy. Turned on the TV... Not just the TV, but the very very nice 40" HDTV (which is a Samsung model that appears close to the LTN-406W for those that care)... And on HD-NET saw this concert: Devo and the yeah yeah yeahs in Central Park on July 22 2004.

We used to love Devo. But I haven't intentionally listened to Devo in nearly 20 years. It was fun watching myself sing along with every word.

Being up late watching Devo reminded me of the first time I saw the Beautiful World video, probably on Night Flight. From their Wikipedia entry "Devo created and directed many of their own videos, and the band has cited the video for the song "Beautiful World" as their favorite example of their video work."

The video works at an entirely different level than the "song." Over the course of a few minutes you see the sweet, sacharine images of our "beautiful world" unraveling into perverse carny devo funkiness... And only in the final moments do they deliver the punchline: "It's a beautiful world... (for you... BUT NOT FOR ME!)" Per the comments on YouTube: "devastatingly poignant irony that probably changed a few lives."

Both the yeah yeah yeahs and Devo were just so damn good. I'm glad I can't sleep.