As has been widely reported around the blogosphere, this weekend we pulled off Yahoo's first Open Hack Day.

The event was successful on so many levels it's hard to convey the way I feel. I will leave it to Chad, who deserves the credit for the event, to offer the official recounting. Beginning to thank people leads down a slippery slope, but I also want to call out Kiersten Hollars. Kiersten is purportedly in PR, but she basically ran point on just about every aspect of this event. Kiersten got almost no time in front of the spotlight, and my guess is that very few hackers who were there would even know who she is... But I assure you that the event could not have happened without her. Anyway, here are a few things that struck me...

Probably the best part about this is that we (my team) have the unequivocal support of Yahoo, across the org chart. An event like this doesn't fly under the radar. From the many, many (literally 100s) of folks that sacrificed their weekend to deal with countless last minute tasks (think stuffing welcome packets for 500), to the many teams whose toes we occasionally accidentally stepped on (only to have them turn around and offer unqualified assistance), to the huge support of our executives (Filo and Ash outlasted me on Friday night)... It's been an overwhelming show of support. Kris Tate said it best - we're a family. By the way, Kris's post impressed the hell out of me. 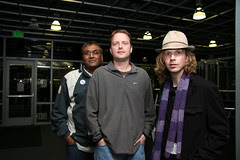 Chad and I introduced Filo (who introduced Beck) on Friday night. As I said then... "We're literally hacking Yahoo... [crowd cheers] and now the man who is giving us the axe... Yahoo co-founder David Filo!" We couldn't do something like this without Filo's implicit support... (and since I don't work directly with David, "Filo" is a proxy for the "seniormost levels of Yahoo.) It's my boss Ash Patel that is really directly empowering us with the resource and permission to make these things happen. A special shout out to Jeff Weiner too - I wouldn't be at Yahoo but for his vision.

The only negative Chad and I have been able to conjure: "This is gonna be hard to top." Good problem to have IMHO. We've already got some ideas :-)