Irene's got a Sonos system in her house...  I discovered a new feature this weekend, and it's pretty darn cool.

I love listening to This American Life, but rarely can free myself up at exactly 12pm on Saturday, when it airs on KQED.  So I started fishing on their website to find out how I could catch it earlier (by say, listening to the East Coast airing on WNYC) or catch it later (listening to the Hawaii airing on KIPO).  But it was really tedious and hard to figure out when it was airing where... 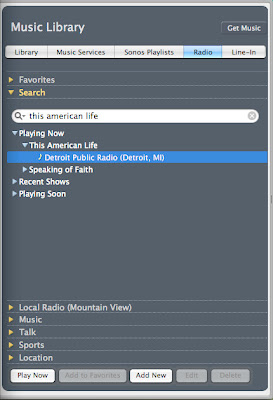 Sonos to the rescue...  There's a feature that allows me to search for shows by name, see if they're playing now, see when the show is playing next (across the zilliosn of stations around the nation that stream), and see what past episodes are available via podcast.  Pretty cool!
at March 29, 2009
Newer Post Older Post Home