MyBlogLog and Yahoo light up the blogosphere

I'm totally stoked about this. In describing MyBlogLog, Chad used an "audio analogy." That definitely works, but I prefer the visual one: as powerful as blogging has been, we've been blogging "in the dark." Being a blogger meant the best relationship one's got with her visitors is through her logs - "Oo oo! 18.85.236.12 visited today at 11:04am!!!" And there's the comments of course, but we know only a fraction of visitors to the blog actually leave comments. See [1].

It's like we've been partying in the dark, and MyBlogLog turned on the lights! Now we can all see who's in the room.

Another analogy - the experience of reading blogs has been like attending a movie in the local metroplex. The cool thing about blogging is that it has democratized the process of making a movie. Now instead of just seeing blockbusters from the major studios, anyone can "make a movie." But the experience of consuming it is the same: a couple hundred strangers wander into a theater, the lights go down, and everyone faces the same direction staring at the screen. Protocol dictates little to no interaction with each other... (Isn't it annoying when there's a chatterbox in the next seat over?)

MyBlogLog turns on the lights, and invites people to look at (and dialog) with each other in addition to looking at the screen. Maybe the right analogy is a sports bar. The game is on the big screen providing the content and context. But the fun part is hooting and hollering with your mates, heckling the guys there to support the other team the next table over, etc. It's communal. It's interactive. It's participitory. It's fun. 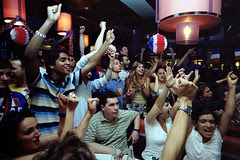 [I've never been to a sports bar. Maybe I got that part wrong.]