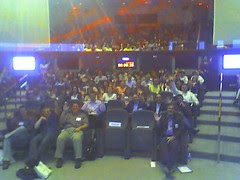 Had the pleasure of speaking today at a CapitalOne summit in DC.

Apart from the travel, I actually love doing these things. (I do wanna give JetBlue props though - pretty flawless service, and gotta love the TV. Watched the US Open while working.) Anyway, speaking with colleagues from Microsoft, Google and AOL, as well as CapitalOne, has been a really valuable experience.

At Virage, we used to strive that every employee had some customer touch and engagement. At Yahoo, it's so easy to change roles and join the ranks of our 500m "customers"... Every employee is most certainly a "user" as well... But it's way too easy to not rub up against the third leg of the stool, our advertisers. Gonna do what I can to make sure that my teams get more exposure.

AOL sent Ted Leonsis. Google sent Vint Cerf. MSN sent Joanne Bradford. Typically, DanR would have done this gig but he had prior obligations so I seized on the opportunity. It's been great.

Leonsis: "The happiest group of people by these measures are evangelical christians."