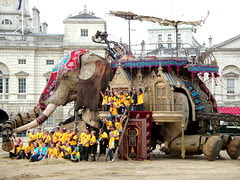 Stewart has referred to Flickr as the "Eyes of the World"... This is a totally apropos vision, but also a not so veiled reference to Stewart's hippie roots.

While I was a grad student, colleagues Ted Adelson and John Wang created something they called a plenoptic camera. The basic insight was to use a lens array, a flexibile piece of plastic that had dozens of micro-lenses etched into it, yielding an effect much like an insect's compound eye. Each lens imaged the scence from a slightly different point of view. This camera was able to derive shape, i.e. depth, from analyzing the resultant image. Think stereo parallax but in 2 dimensions and with many more samples. Also, since the "baseline" of nearby lenses was so short there was no course "feature matching" needed.

That's the insight as I recall it, and hopefully someone closer to the research can correct any errors I've made. I see that folks at Stanford have continued and extended the research.

In addition to the practical applications of this work (as demonstrated by the Stanford team the ability to change depth of field effects in a photograph after the fact), I remember hearing Ted Adelson talk about how they came up with the name "plenoptic" for the research. Plen from the latin plenus meaning "full", and optic from the Greek optikos relating to vision or "eye". The idea was that while a normal camera captured the scene only as rendered at one point in space-time, the plenoptic camera captured a "fuller" representation. (Actually if you think about it, space-time is completely packed with potential vantage points. While fuller than a normal camera, the "plenoptic camera" is still just imaging a few dozen points out of the innumerable possible ones!)

So what does this have to do with Flickr?

Bummed, he went to Flickr to upload and tag the photos. While doing so, he discovered that by happenstance another Flickr user had taken the perfect shot of his kids and the elephant. This person must have been another 20 feet back in the crowd. How cool is that?! I thought this was a nice "eyes of the world" (and plenoptic camera) story.

(I will try to contact the parties involved and link to the actual photos in question.)

Relating back to the previous post, I recall soon after Flickr joined Yahoo asking Heather if there was a way I could solicit more photos of Westbeth. (A building in NYC I'm fond of...) She said, "Sure! I can make that happen for you!" But Heather, being the community manager of Flickr, had the means to rally the troops toward any cause... But I said, "No. I'm not interested in how you would do it... I'm interested in how one would do it..." And she suggested finding a relevant group (in this case maybe this one) and just sending up a "Would someone go take a picture of Westbeth for me?" flare.

(By the way, I never did this. 15 months ago, there was a single photo of Westbeth. You can see I lamely called to the photographer herself "More pictures of Westbeth please!" Now, there are dozens of photos... including exactly the shots of the courtyard I wanted like this one and this one. I did my part and contributed a few...

Heather's suggestion, leveraging the community to help "invoke" pictures is quite effective within Flickr. In fact, many of the group photo pools are calls to action to create "knowledge" on demand. In this respect, it's a lot like Yahoo! Answers... but instead of "knowledge" being a textual response to an explicit query, "knowledge" now becomes pixels...


By the way, if anyone has a line on how to get a flexible lens array like the one referenced above, please let me know! Turns out these are hard to come by, unless I want to have them manufactured by the gross.