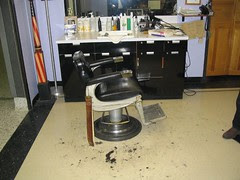 I was in Boston today, presenting at an internal IDG conference.

After the conference, I tried to jam in a haircut at the Great Cuts right around corner from the Charles Hotel where I was staying… I noticed over the weekend that I’m due to be videotaped tomorrow morning and wanted to prune what had become a “full-on raging ‘fro” as Bobby would say. (This reminds of the time that I let the ‘fro grow really big and then parted it on the side. Coupled with major black “Buddy Holly” glasses I was going for hyper-nerd, but was assured by both friends and strangers that this was not working at any level. Bob titled a Spahn Ranch song after the episode – “Part (with Laughter)”, which (apart from the title) was not about my coiff.)

I am not sure what this video thing is but it’s with Bambi Francisco (whom I’ve never met) and I think ends up on marketwatch.com’s website but probably gets most its distribution through Yahoo! Finance links. Anyway, I’ll post a link once I figure that out.

Without even walking into Great Cuts I could see that there was a lineup that amounted to a long wait. That wouldn’t work for me because I needed to catch a flight out of Logan. Oh well. On the way to the airport, I started wondering if I’d seen a barber at the airport there before. Yeah, I thought I had...

There in Terminal C, I found it. Until I was actually sitting in the chair, I didn’t really notice what I’d stumbled upon… This was an authentic “Ol’ School Barber Shop”… the “Classique Hair Salon.” Classique is classic. It was right out of a Scorcese movie set. There was a neck brush perhaps made of horsehair, and I kid you not – a leather strop on the barber chair. A shelf full of tonics and oinments, most from vendors that probably no longer exist. He removed his trusty scissors from a little black leather case that was chock full of implements. (Occurred to me that it was odd having all this weaponry so close to the security checkpoint.) The barber (alternately Vincent or Vincenze as the mood hit him apparently) had a slew of certificates on the wall. One, dated 1979, congratulated Vincent on ten years of service and was from “Roffler”. I wondered what “Roffler” was, and later noticed on the shelf a nasty squirt bottle of “Roffler Super Thick and Rich” shampoo on the shelf. Also check out the trophy, with the upside down “’76”. Reminds me of the most excellent ween song “Freedom of ‘76” which would be the perfect background music for this experience… “A bacon steak, a perfect match…” 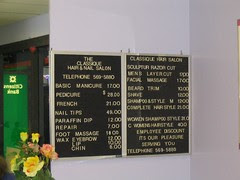 I did the math and realized he’d been cutting hair for at least 37 years, which I figured made him at least 57. He looked fantastic for that age, awesome in fact. He had his hair in a modified pompadour… He actually needed a haircut, which I thought was ironic. “Physician – heal thyself.” Carmine sat there at her manicure station and devoured an orange. 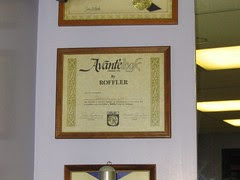 While in the chair a TSA guy ambled in and mumbled “Howya doin’?” to Vincent and Carmine, who mumbled something back. He sat down, grabbed the paper, kicked his feet onto the coffee table and started reading. I wondered for a moment was waiting for a cut when I noticed that although probably 30 years old, he was bald on top and already closely shaven on the sides. I understood then that this was his daily practice, to make the rounds during his coffee break and just kick back and read the paper.

He didn’t say another word for 15 minutes, then got up with a “Seeya” and sprang off. 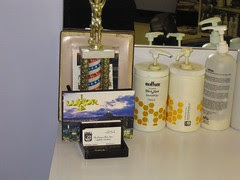 My haircut proceeded in silence, without any chitchat whatsoever. It was a good haircut, thoughtful and precise. It cost $17 and I gave him $21. I then asked him if I could take a few photographs. He asked why, and I said, “Because you’re a relic! A real ol’ fashioned barber shop!” He said, “You got that right! Sure, take some pictures… but not of me!”

It was fun. I made the flight on time. You can see the fruits of Vincent’s crafts when the Bambi thing goes live.
at April 24, 2006
Labels: personal
Newer Post Older Post Home